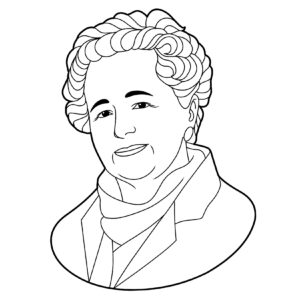 Gertrude B. Elion’s efforts over her career as a chemist have improved and saved the lives of countless individuals. Revolutionizing the development of drugs, she, along with her research collaborator, George Hitchings, developed the first anti-viral medication; the first immunosuppressant; and the first chemotherapy for childhood leukemia. In 1988, in recognition of her accomplishments, she received the Nobel Prize in Physiology or Medicine. Elion is named on 45 patents for life-saving and life-changing drugs and was awarded 23 honorary degrees.

Born on January 23, 1918, in New York City, Gertrude B. Elion was the daughter of Robert Elion and Bertha Elion, both affected by the Wall Street Crash in 1929. As she graduated from Walton High School at the age of 15, she spent time with her grandfather, who died of stomach cancer the same year. These last moments inspired Gertrude to pursue a career in science and medicine.

In 1944, Elion joined Burroughs-Wellcome pharmaceutical company (now GlaxoSmithKline) as an assistant to George Hitchings. Elion pursued a doctorate program part-time at New York Tandon School of Engineering, but when asked to choose between her job or pursue a doctorate full-time, Elion stayed with her research position. George Hitchings’ research interests lay in the intentional imitation of natural compounds as a development for drugs in place of the more common trial and error process. Under Hitchings, in 1950, Gertrude synthesized anti-metabolites of purines developing tioguanine and mercaptopurine. Using rational drug design, Elion and Hitchings developed drugs used as treatments for leukemia, malaria, lupus, hepatitis, arthritis, gout, organ transplant rejection, herpes, and AIDs among other maladies.

In addition to her research and jobs, Elion worked with many organizations, including the National Cancer Institute, American Association for Cancer Research, and the World Health Organization. After heading the Department of Experimental Therapy at Burroughs-Wellcome between 1971-1983, she officially retired in 1983. Gertrude taught as an Adjunct Professor of Pharmacology and Experimental Medicine at Duke University from 1971-1983 and as a Research Professor from 1983-1999. Under her mentorship, she published over 25 papers with graduate students. After her retirement, she played a significant role in the development of AZT and nelarabine and followed her passion for encouraging women to pursue careers in science.

Elion, along with Hitchings and Sir James Black, received the Nobel Prize in Physiology or Medicine in 1988 for their discoveries of important new principles of drug treatment. In 1989, New York Tandon School of Engineering awarded her an honorary PhD, as did Harvard University in 1998. She received many awards and recognitions and became the first woman to be inducted to the National Inventors Hall of Fame in 1991.

At the age of 81, Gertrude Elion died in North Carolina in 1999. In her honor, every year GlaxoSmithKline and the AACR award the Gertrude B. Elion Cancer Research Award to researchers to encourage and support research in cancer etiology. In her own words, “The Nobel Prize is fine, but the drugs I developed are rewards in themselves.”