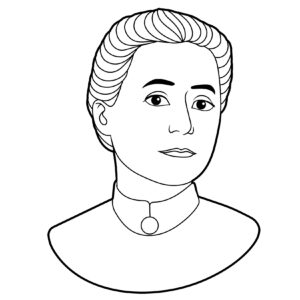 Florence Augusta Merriam Bailey was an ornithologist, animal rights’ activist and author. She is considered a pioneer in modern birdwatching: at a time when the most common practice for studying birds was to shoot or trap them, Merriam Bailey practiced and advocated for observational birdwatching.

She was born in 1863 in Locust Groove, New York, the youngest daughter of a congressman. Her parents were themselves nature enthusiasts: they were friends with John Muir (naturalist and co-founder of the Sierra Club), and they encouraged their children in their interest in the life sciences. Her oldest brother, C. Hart Merriam, became a zoologist and head of the U.S. Biological Survey, as well as one of the founders of the National Geographic Society.

Merriam Bailey attended Smith College. She combined university lessons with field-trips for bird watching, where she often guided other students, and she started contributing to ornithology magazines. During her time in college, Merriam Bailey initiated what would be a lifelong dedication to animal rights’ activism. At the time, it was in fashion for women’s hats to be adorned with bird’s feathers, a practice that took the life of five million wild birds per year. In order to persuade her classmates to abandon the trend, Merriam Bailey took them on a field trip. She believed that making them acquainted with wild birds and their habitats would be much more effective than calling them out on their fashion choices.

In her last year of college, 1886, she organized the Smith College Audubon Society (SCAS), a local chapter of Grinnell’s National Audubon Society. In 1889, she published her first book, “Birds Through an Opera Glass,” considered the first modern illustrated field guide. In it, Merriam Bailey introduced the practice of non-intrusive birdwatching. Of birds, she wrote, “Follow them and they will teach you the secrets of the forest.”

After college, she moved back to her parents, and later to New York City, where she got involved in social work. Soon after, Merriam Bailey developed some health problems, believed to be tuberculosis, and she travelled to western USA. She visited Utah, California, and Arizona, and published several bird field guides from those experiences.

When her health improved, Merriam Bailey moved to Washington, and she married fellow zoologist Vernon Bailey, Chief of Field of the U.S. Biological Survey, in 1899. Together, the couple traveled extensively throughout the US. Bailey collected and studied plants, mammals, reptiles, and birds, while Merriam Bailey was dedicated to bird observation. They usually spent only the winters in their house in Washington. In those periods, Merriam Bailey founded the Washington chapter of the Audubon Society and was an active member of the Women’s National Science Club.

In 1902, Merriam Bailey published “Handbook of Birds of Western United States.” With over 600 illustrations, it was the regional bird guide reference for over 50 years. In 1885 Merriam Bailey became the first woman associate member of the American Ornithologists’ Union and in 1929, she was the first woman to be elected as a fellow. The Baileys continued with their active life for as long as they could, and they were both prolific writers. Merriam Bailey published her last book when she was 75 years old. She passed away in 1948, six years after the death of her husband.