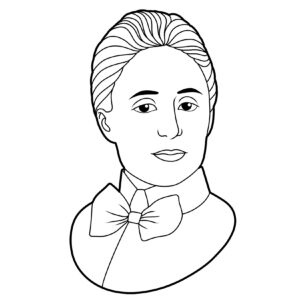 Emmy Noether was a German mathematician and considered one of the greatest mathematicians and scientists of all time. Her theorem, Noether’s theorem, changed classical and quantum physics and her research contributed extensively to the field of abstract algebra. In addition to mathematics, Noether is recognized today for her dedication and perseverance to mathematical education. Her life’s work, is commonly divided into three epochs: first, 1907–1919, the period of relative dependence; second, 1920–1926, the investigations grouped around the general theory of ideals; third, 1920–1926, she focused on noncommutative algebra, linear transformations, and commutative number fields.

Amalie Emmy Noether was born in Erlangen, Germany on March 23, 1882. She was the eldest child of mathematician, Max Noether, and Ida Amalie, after whom she is named. As a child, Noether focused her studies on languages earning a certification that would allow her to teach French and English at schools for girls. Unable to study at the University of Erlangen as a woman, Noether audited courses in mathematics for two years before taking an exam that permitted her to pursue higher education.

After completion of her doctorate, Noether taught at the University of Erlangen’s Mathematical Institute with her father, substituting for him when he was ill. Noether continued to publish papers, catching the eye of Ernst Fischer who introduced her to David Hilbert. In 1915, Hilbert and Klein invited Noether to teach at the University of Göttingen. She was not offered an official position or given any compensation due to restrictions placed on females. Here, Noether proved a mathematical theorem known as Noether’s Theorem, but the paper was presented by her colleague, Klein. The theorem states that any differentiable symmetry is associated with a conservation law.

After World War I, she was recognized with a professorship, but was still provided no pay. Using her classroom as a discussion platform, she encouraged and empowered many of her students. Her discussions often extended into parks and her living room when university doors were shut. Most of her students were male and sometime called the “Noethers’ Boys,” many of whom advanced the field of mathematics. In 1928, Noether accepted the invitation of Moscow State University to teach algebra and geometry as well as contribute to research on the Galois theory. In 1933, along with many of her colleagues, Noether found refuge in the United States. She continued teaching and researching at Bryn Mawr College and Princeton, surrounding herself with supportive colleagues and enthusiastic students.

Amalie Emmy Noether died on April 14, 1935, at age 53. She had surgery to remove an ovarian cyst, during which two smaller tumors in her uterus were left to prevent prolonging the surgery. Although she began to recover normally, she died after her temperature increased to 109 degrees. The exact cause of death remains unknown. Her ashes were interred under the walkway of Bryn Mawr’s M. Carey Thomas Library. In the months that followed, many mathematicians, including Albert Einstein, wrote tributes to her mathematical genius. Universities, awards, and workshops in Germany, Israel, Russia, and the United States recognize her through buildings, monetary grants, and educational programs. The Emmy Noether Council works internationally to increase the number of women in physics and mathematics. A crater, a minor planet, and a satellite hold her name. Mathematician, Norbert Weiner, wrote, “Miss Noether is … the greatest woman mathematician who has ever lived; and the greatest woman scientist of any sort now living, and a scholar at least on the plane of Madame Curie.”