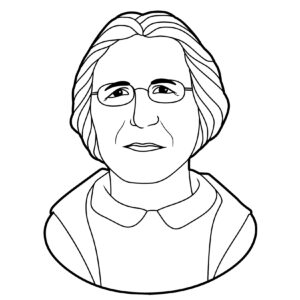 Emma Rowena Caldwell Gatewood, known as “Grandma Gatewood,” was an American extreme hiker. She was the first woman to hike the Appalachian Trail (AT) solo in one season. Gatewood accomplished this in 1955 at the age of 67; being the mother of 11, a grandmother, and a great-grandmother. She hiked the AT three times; being the first person, man or woman, to complete the trail more than once. “Grandma Gatewood” has been the subject of books, documentaries, and songs.

Gatewood was born on October 25, 1887, in Guyan Township, Gallia County, Ohio. She was one of 15 siblings. She attended school through the eighth grade. When she was 19, she entered into an abusive marriage with Perry Clayton Gatewood which did not come to an end until 1941 when she was 54. Gatewood had 11 children. During this time, she found the woods peaceful and used it as an escape.

Gatewood’s first attempt of the Appalachian Trail started in Maine in 1954 and ended unsuccessfully. In 1955, at age 67, she started in Georgia and walked north. When Gatewood left, she told her children that she was going for a walk.  Wearing canvas Ked sneakers and carrying only a few essentials, Gatewood hiked the 2,050 mile (3,300 km) trek. Gatewood is considered a pioneer in “ultralight backpacking,” a style that emphasizes carrying the simplest and lightest gear.

Gatewood’s hike was inspired by an article that she read in the August 1949 National Geographic, “Skyline Trail from Maine to Georgia.” When asked why she decided to take on the Appalachian Trail, she stated, “I thought it would be a nice lark.” She also noted the difficulties she faced along the way. “I would never have started this trip if I had known how tough it was, but I couldn’t and I wouldn’t quit.”

During her journey, Gatewood garnered a significant amount of media attention. News sources tracked the “old lady alone on the trail,” attempting to interview her at intersecting points along the way. This helped Gatewood as she made friends on the hike who offered food and assistance. She completed the hike in 146 days, averaging about 14 miles per day.

Gatewood was a lifetime member of the National Campers and Hikers Association and the Roanoke Appalachian Trail Club, and was Director Emeritus of the Buckeye Trail Association. Gatewood traveled to every state in the continental United States.

Emma Rowena Caldwell Gatewood died in 1973 at the age of 85. Her favorite hike was a six-mile trek in Hocking Hills State Park in Ohio. This stretch is now deemed “the Grandma Gatewood Trail.” In 2012, she was inducted into the Appalachian Trail Hall of Fame. In 2014, her great-great-nephew, Ben Montgomery, published Grandma Gatewood’s Walk: The Inspiring Story of the Woman Who Saved the Appalachian Trail.