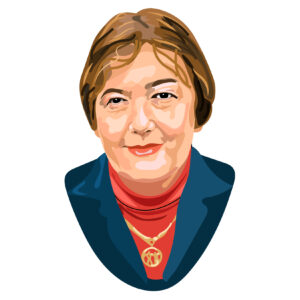 Dian Fossey was an American primatologist and conservationist, known for her studies on mountain gorillas in the forests of Rwanda. Her work contributed to the improved understanding of mountain gorillas and the strengthening of their declining numbers.

Fossey was born January 16, 1932, in San Francisco, California. She was an animal lover from an early age and became a prize-winning equestrian. Fossey earned a bachelor’s degree in occupational therapy in 1954, though in 1963 she borrowed $8,000 and withdrew her life savings to embark on a seven-week trip to Africa. Fossey met the paleoanthropologist Lewis Leakey while in Tanzania, he worked on human evolution and had supported eminent primate researchers to study great apes in the field. It was during this first trip to Africa that Fossey first encountered wild mountain gorillas, and she developed a dream to one day return to learn more about them.

After returning to the USA, Fossey learned that Leakey was in Louisville on a lecture tour. He remembered Fossey and her interest in mountain gorillas and offered her a chance to carry out a long-term study of them in Africa. In 1966, Fossey resigned from her job to study mountain gorillas in the Democratic Republic of Congo. However, there was conflict in the country that forced her to leave and so she resumed her work in Rwanda in 1967.

Little was known about mountain gorillas prior to Fossey’s work. However, there was a common belief that they were dangerous animals that would kill if threatened, and their numbers were declining due to poaching and habitat loss. Fossey’s first challenge was to habituate her study subjects and make them comfortable in her presence. Her methodology centered on mimicking the behaviors of the gorillas: she munched on celery stalks, beat her chest with her fists, and copied their grunting sounds. Fossey could soon sit comfortably with the gorillas and learned much about their group dynamics. In 1970, Fossey appeared on the cover of National Geographic magazine. She stated that despite gorillas being widely maligned, she had observed just five minutes of aggressive behavior in over 2,000 hours. To assist with the scientific aspects of animal behavior, Fossey embarked on a PhD at the University of Cambridge. She divided her time between Cambridge and Africa until completing her doctorate in 1974.

Conflict between Fossey and poachers grew in the 1970s, as gorillas were regularly being killed for trophies or their body parts. Fossey is believed to have hired guards to assist with her patrols of the forest and she would dress as a witch to scare away the poachers that believed in black magic. In 1977, “Digit,” a gorilla with whom Fossey formed a close bond, was killed by poachers as he tried to defend his family. Fossey said this was probably the saddest event in all her years living with the gorillas. In 1978, several of Digit’s family members were killed and the tension between Fossey and poachers grew stronger.

Despite these difficulties, Fossey’s book Gorillas in the Mist was published in 1983. This was a personal account of her time studying and protecting mountain gorillas and was adapted into a film in 1988.

On December 27, 1985, Fossey was found murdered in her cabin in the Virunga Mountains, Rwanda. Many believe it to be associated with her anti-poaching conflicts, though the identity of her killer has never been proved. Dian Fossey is still viewed as having changed the world’s view of mountain gorillas and their conservation. Efforts to continue her work remain through the Dian Fossey Gorilla Fund and the Karisoke Research Center.