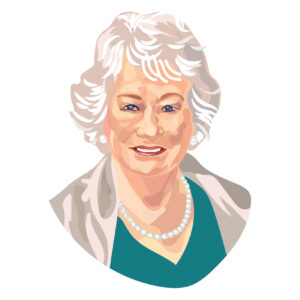 Daphne Sheldrick dedicated her career to the protection and conservation of African wildlife. From 1955-1976 she was co-warden of the Tsavo National Park, where she developed the first successful milk replacement formula for orphaned baby elephants. The formula developed by Sheldrick used coconut oil as a substitute for the fat that is normally found in elephant milk. In 1977, she founded the David Sheldrick Wildlife Trust.

Dame Daphne Marjorie Jenkins Sheldrick, DBE was born in Kenya on June 4, 1934, to British parents. On October 20, 1960, she married David Sheldrick. David was the founder of Kenya’s largest National Park, Tsavo. Together the Sheldricks cared for orphaned animals and worked to reintegrate them back into the wild. In 1977, David Sheldrick died from a heart attack at age 57. After his death, Sheldrick continued her conservation efforts and founded the David Sheldrick Wildlife Trust to honor her late husband.

The trust operates as an independent non-profit organization focused on wildlife protection and conservation. The work of Sheldrick and her team has led to the rescue of more than 262 elephants and the reintegration of 160 elephants over the last 42 years. Since its conception, the Sheldrick Wildlife Trust has expanded their efforts to include anti-poaching initiatives, mobile veterinary medical care, community outreach, and habitat protection and restoration. The trust was renamed to the Sheldrick Wildlife Trust in 2019 and is still instrumental in the protection and conservation of wildlife today.

Daphne Sheldrick’s contributions to wildlife rehabilitation and conservation were recognized by her numerous outstanding achievements including: The Most Excellent Order of the British Empire, an Honorary Doctorate in Veterinary Medicine and Surgery from Glasgow University, a Moran of the Burning Spear presented by the Kenyan government, and the BBC Lifetime Achievement Award. In 2006, Queen Elizabeth II promoted Sheldrick to Dame Commander of the Order of the British Empire.

In addition to her work in conservation, Sheldrick was also an accomplished writer with many of her stories centered around her work with elephants. Some of her written works include her autobiography as well as “The Orphans of Tsavo” and “Love, Life and Elephants: An African Love Story.” Sheldrick’s work was also the focal point of multiple televised broadcasts and documentaries such as the BBC’s “Elephant Diaries” and 60 Minutes “The Elephant Diaries.”

Daphne Sheldrick passed away in 2018 at the age of 83 from breast cancer. Her legacy and contributions to the protection of orphaned and endangered wildlife continue through the work of her daughter, Angela, who continues to operate the Sheldrick Wildlife Trust.