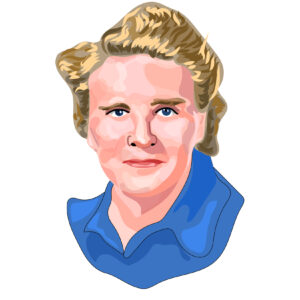 Celia Hunter was a pilot and adventurer turned conservationist who created and worked to pass an act that expanded the Alaskan national park system by over 43 million acres (174,000 km2) and created ten new national parks. Among her other wilderness preservation efforts, Hunter protected the northwestern Pacific coast from nuclear bomb blasts and the Yukon River from a massive dam that would have affected far away climates and ecosystems. She also founded the Alaska Conservation Foundation.

Celia Hunter was born on January 3, 1919, in the small town of Arlington, at the foothills of the Cascade Range, Washington. She grew up on her family’s farm during the Great Depression and was raised as a Quaker. Living a modest Quaker lifestyle taught her the values of non-violence, seeing beauty in people and the natural world, and treating people equally. The heritage also instilled a sense of confidence in her to follow her dreams even if they led her on an unconventional path for women at the time.

Soon after her 21st birthday and not long before WWII, Hunter decided to learn how to fly. In 1943, Hunter joined the Women Air Force Service Pilots (WASP) program where she flew fighter planes and other military aircraft. She met Ginny Hill Wood during this program and the two became curious about flying to Alaska as the military wouldn’t allow women to deliver planes there. They were able to make a deal with a pilot who needed planes delivered to Fairbanks, a journey that took them 27 days due to awful winter weather. Hunter and Wood arrived in Alaska during a blizzard so they decided to stay and work in the tourism industry. The two women left Alaska for Europe but were eager to return and did so by hitchhiking on a tanker across the Atlantic Ocean. Hunter, Wood, and Wood’s husband, a Denali National Park ranger, purchased land with a view of Denali (Mt. McKinley), the tallest mountain in North America. They opened Camp Denali in 1952 and operated the backcountry refuge until the mid-70s. The camp was meant for those who prefer experiencing nature without modern conveniences and remains a popular and educational ecotourism retreat.

In 1960, Hunter became a founding member of the Alaskan Conservation Society (ACS), a group that garnered public support for the Alaskan National Wildlife Range, now the Alaskan National Wildlife Refuge. Hunter served as Executive Secretary of ACS, during which she organized a battle against the massive Rampart Dam on the Yukon River and against Project Chariot. The Ramparts would have created a 300-mile-long lake that would have submerged villages and destroyed wildlife habitat. Project Chariot would have detonated four nuclear warheads to create a deepwater harbor along the northwestern coast. Hunter also fought for the passing of the Alaska National Interest Lands Conservation Act (ANLICA), protecting over 50 million acres as federal wilderness areas. She was a board member for the Wilderness Society and Alaska Nature Conservancy, and served on the Federal-State Land Use Planning Commission. Hunter served as the Executive Director for the Wilderness Society in the late 1970s. She remained outspoken and wrote environmental columns.

In 1991, Hunter received the Sierra Club’s highest honor: the John Muir Award, and the Wilderness Society’s highest honor: the Robert Marshall Award. Celia Hunter passed away at age 82 on December 1, 2001, in her log cabin. She was dedicated to wilderness preservation until her last day when she wrote messages to senators persuading them to oppose oil drilling in the Arctic National Wildlife Refuge.