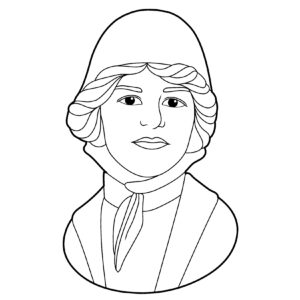 Blanche Stuart Scott was born on April 8, 1884, in Rochester, New York. Scott became a competitive ice skater and loved doing tricks on her bicycle, often out-performing many of her male peers. Eager to try driving one of the new “horseless carriages,” Scott talked her father into teaching her. John Scott not only taught her to drive but purchased her a new one-cylinder Cadillac automobile. At the time, there were no age restrictions nor driver’s licenses, and the 13-year-old Scott drove all throughout the city.

After Scott’s father died in 1903, her mother sent her to a finishing school in New England, hoping to smooth out some of her spirited daughter’s “rough edges.” Upon graduating, Scott moved to New York City. Inspired by the story of Percy McGargle’s record-setting automobile trip across the United States, Scott decided to become the first woman to accomplish the same feat. Scott contacted the president of the Willys-Overland Motor Company and arranged to drive one of the company’s automobiles on a transcontinental tour.

At that time, there were only approximately 200 miles (320 km) of paved roads outside of cities.

The publicity Scott garnered from her automobile odyssey led to an offer to learn to fly with the Glenn Curtiss Exhibition Company. She was taught by Glenn Curtiss on a 1911 Curtiss Model D, or “Curtiss Pusher” which had only one seat. Curtiss was unenthusiastic at the idea of a woman pilot but agreed to give her lessons. During one of Scott’s initial runs, he placed a limiter on the foot throttle, preventing the plane from flying. Nevertheless, the plane accidentally became airborne up to 40 feet. Scott landed safely and is credited with the first female flight in the United States on September 2, 1910. Scott persisted in her flying lessons and made her debut as a member of the Curtiss Exhibition Team in October of 1910 at a Chicago air meet, becoming the first female aviator to make a professional appearance in the country. Dubbed the “Tomboy of the Air,” Scott proceeded to fly for several exhibition teams, performing inverted flight and “death dives” from 4,000 feet (1,200 m). In 1911, Scott inadvertently set another world record for the first long-distance flight by a woman when she took off from Minneola, New York, and flew 60 miles (96 km) before landing back at the field. Soon thereafter, Scott became the first female test pilot.

In the early days of aviation, accidents and fatalities were common, and Scott survived a number of violent crashes. She suffered a serious injury in an accident in 1913, from which it took her a year to recover. She retired from active flying in 1916.

Scott went on to become a screenwriter, movie producer, and radio personality, but her passion for flying never left her. In 1948, she became the first woman passenger to ride in a jet plane. In 1954, Scott became a consultant to the United States Air Force Museum.

Blanche Stuart Scott died on January 12, 1970, at the age of 84. The U.S. Postal Service honored her with a commemorative stamp in 1980. Scott was inducted into the National Women’s Hall of Fame in 2005.