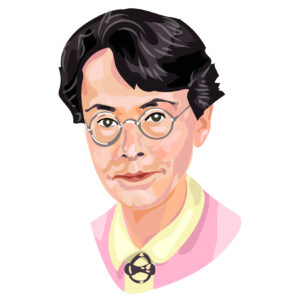 Barbara McClintock was an American scientist and winner of the 1983 Nobel Prize in Physiology or Medicine, for the discovery of genetic transposition. A transposable element or jumping gene is a DNA sequence that can change its position within a genome. She was the first woman to win the prize unshared.

McClintock was born June 16, 1902, in Hartford, CT. In 1908, her family moved to Brooklyn, where she completed her secondary education and discovered her passion for science. She enrolled at Cornell University to study Botany in 1919, against her mother’s wishes, but with her father’s support. In 1922, McClintock was invited to enroll in a graduate genetics course, a subject that she later dedicated her life to. Her work centered on maize cytogenetics, which concerns the structure and inheritance of cells’ DNA. At the time, women could not major in genetics at Cornell. Both her MS (1925) and PhD (1927) were awarded in botany, since women were allowed to earn graduate degrees in Cornell’s Plant Breeding Department at the time. She continued her research at Cornell beyond this, forming a close-knit group with two other academics interested in cytogenetics.

McClintock’s research focused on maize chromosomes and developing ways to visualize and characterize them. She successfully developed a technique to visualize all 10 maize chromosomes and was the first person to describe their morphology, which in turn allowed her to link groups of traits that are inherited together. McClintock also discovered how the recombination of parental chromosomes resulted in new traits in offspring, and in 1931 she published the first genetic map for maize. Her achievements resulted in numerous fellowships which allowed her to continue her research at a number of U.S. universities. In 1944, she was elected to the National Academy of Sciences for her contribution to the field of genetics, becoming the third woman to be elected. In 1945, she became the first female president of the Genetics Society of America.

McClintock’s most influential work was that on “controlling elements” (often referred to as “jumping genes”), which challenged the view of the genome as static information passed between generations. She found that individual genetic loci (the position of a gene on a chromosome) could both influence and interact with other genetic loci and that they could change positions on a chromosome (hence, “jumping” gene). This work was not received well initially, with McClintock herself describing the reaction as “puzzlement, even hostility.” She persisted with her research through a 1953 paper in the journal Genetics and subsequent lecture tours of universities. However, she later halted publications to prevent further alienation from the scientific community.

In the 1960s, other scientists’ findings on controlling elements in bacteria and yeast confirmed McClintock’s discoveries. The concept then became more widely accepted and her career prospered. She received numerous prizes and awards, including 14 honorary Doctor of Science degrees and an induction into the National Women’s Hall of Fame. The most notable award was the 1983 Nobel Prize for Physiology or Medicine for her discovery of “mobile genetic elements” thirty years after her discovery.

Barbara McClintock’s contributions to science continued beyond her Nobel Prize. She continued to be a leader and researcher in her field, until her death at the age of 90 in 1992.