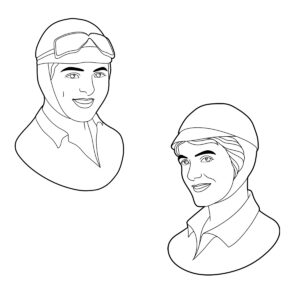 Augusta Van Buren and Adeline Van Buren were the second and third women to drive motorcycles across the continental United States. The sisters rode 5,500 miles (8,800 km) in 60 days, each on their own motorcycle, starting on July 4, 1916, and completing on September 8, 1916.

Augusta and Adeline Van Buren, born on March 26, 1884, and July 26, 1889, respectively, were born to a wealthy family in New York. They experimented with activities such as boxing and riding motorcycles, that were considered unconventional for women at the time. As the U.S. was about to enter World War I, the Van Burens were active in the national Preparedness Movement, a campaign to strengthen the U.S. military. The Van Burens wanted to prove that women could serve as military dispatch riders, freeing up men for other tasks.

In 1916, Augusta (32) and Adeline Van Buren (26), crossed the country on two Indian Powerplus model motorcycles, which sold for $275 at the time. To prepare for their journey they took long rides around New York, gradually building up their riding stamina before they began their trip to the West Coast. They departed New York on July 4, 1916, and headed to Springfield, Massachusetts, in order to visit the Indian factory, an homage to the vehicles that would spirit them across the country. From there they headed west on roads that roughly paralleled what is now Interstate-80.

The sisters traveled through numerous states and encountered a variety of challenges. A consistent problem on their trip was a lack of quality roads and maps. In the early 1900s there were no updated road maps or well-kept networks of roads west of the Mississippi. Once the sisters were outside of Chicago, they began to get noticed by locals and law enforcement, but not for the reasons that they had hoped. It was illegal in many states for women to wear pants, so the sisters’ military-style leggings and riding breeches caused a stir in the small towns they passed through.

The women also faced numerous other challenges. They weathered sandstorms and downpours, dealt with overheated engines and poor roads. They became the first women to summit the 14,000 ft (4,200 m) Pike’s Peak in Colorado on motorized vehicles. From there they pushed onwards to the west until they reached California, then turned their journey south as they headed for the U.S.—Mexico border. They arrived in early September, completing their trip in just over two months.

The Van Buren sisters set out to prove to their country that women were capable of serving in the military as dispatch drivers. They also hoped to remove one of the primary arguments for denying women the right to vote. The Van Buren’s ride was successful, but their applications to be military dispatch riders were rejected. However, both women went on to pursue careers. Adeline achieved a law degree from New York University and Augusta became a pilot and flew in Amelia Earhart’s Ninety-Nines, an international organization dedicated to creating a supportive environment and opportunities for female aviators.