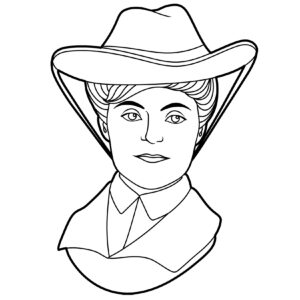 Annie Smith Peck was an American mountaineer, explorer, and author known as “America’s favorite woman climber.” In 1908, she was the first person to climb Peru’s Mount Huascarán. Peck was also a suffragist, a professor, and a public speaker.

Peck was born on October 19, 1850, in Providence, Rhode Island. In 1870, she attended the Rhode Island State Normal School and then the University of Michigan (1874–1878), where she graduated with honors. In 1881, she received her Master’s degree from Michigan. Peck took a position teaching Latin at Purdue University from 1881–1883.

In 1884, Peck traveled to Europe, where she continued her education in Germany and Greece. She was the first woman to attend the American School of Classical Studies at Athens (ASCSA). From 1886 to 1887, Peck took a position teaching Latin at Smith College.

Peck took up mountaineering in her forties. She initially became interested after visiting Europe. She started by ascending mid-sized peaks in the U.S. and Europe, including Mount Hymettus and Mount Pentecus while in Greece and Mount Shasta, California in 1888.

By 1892, Peck made her living by lecturing and writing about archeology, mountaineering, and her travels. In 1895 she became the third woman to summit the Matterhorn in the Swiss Alps and the first female to do so while wearing pants. Her clothing choice garnered a lot of attention due to the norms of the time.

In 1908, Peck took on a record-breaking ascent of the north peak of Peru’s Mount Huascarán (22,205 ft/ 6,700 m) at the age of 58. The journey took her nearly a decade, and six attempts. At the time, the exact height of Huascarán, and other world’s highest peaks, was not fixed. She believed she climbed the highest summit in the Americas but was nevertheless the first person to scale its heights. For her ascent of Huascarán, she designed her own mountain shoes and had them made to order.

In 1911, Peck climbed Peru’s Mount Coropuna (21,083 ft/ 6,400 m) and placed a flag with “Joan of Arc Equal Suffrage League – Votes for Women” embroidered on it. She and her climbing party descended down the eastern side of the mountain to La Paz. There she gave a lecture on the United States to a group that included the president of Bolivia.

Annie Smith Peck died of bronchial pneumonia on July 18, 1935, at age eighty-four. Peck had started a world tour, but became ill while in Greece climbing the Acropolis of Athens. She then returned to New York City where she passed away. Peck published four books: A Search for the Apex of South America (1911), The South American Tour (1913), Industrial and Commercial South America (1922), and Flying over South America—20,000 Miles by Air (1932). In 1927, the Lima Geographical Society renamed the northern peak of Huascarán the Cumbre Aña Peck in her honor, as its first climber. Her work and research are preserved at the Brooklyn College Library Archives and Special Collections, including diaries, personal papers, and photographs.