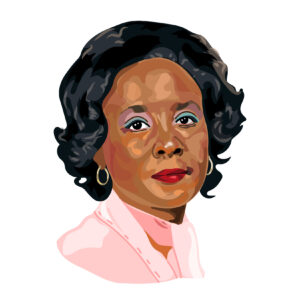 Annie Easley was as an American computer scientist, mathematician, and rocket scientist at the Lewis Research Station (known today as NASA Glenn Research Center). Easley began her career in 1955 and was one of the first African-Americans to work as a computer scientist at NASA. During her 34-year career she analyzed alternative power technologies, contributed to the 1997 flight to Saturn of the Cassini probe, and worked on the nuclear-powered rocket systems. While at NASA, Easley was an Equal Employment Opportunity (EEO) counselor, founded the NASA Ski Club and was the club’s first President.

Easley was born on April 23, 1933, in Birmingham, Alabama. In a 2001 interview, she reminisced of her childhood, “[My mother] told me, ‘You can be anything you want to. It doesn’t matter what you look like, what your size is, what your color is. You can be anything you want to, but you do have to work at it.’” Easley graduated number one in her high school class and then attended Xavier University to study pharmacy. After two years, she returned to Birmingham. She worked as a substitute teacher and spent time helping her community fight against discrimination in the voting registration process.

In 1955, Easley moved to Cleveland, Ohio and planned on continuing her pharmacy education, but the Case Western Reserve school was closed. After reading an article that the National Advisory Committee for Aeronautics (NACA) was looking for applicants with strong mathematical skills, she applied to work at the Lewis Research Station and was hired two weeks later.

Some of the projects she worked on included research for the mission and launch of astronaut John Glenn into orbit in 1962; running simulations for the Plum Brook Reactor Facility in Sandusky, Ohio; working on nuclear-powered rocket systems such as the Centaur high-energy booster rocket which launched in 1963, and writing computer code that analyzed alternative power technologies. She worked on alternative energy research projects focusing on solar and wind power.

As technology advanced, she began additional training and learned computer programming languages like the Formula Translating System (Fortran) and Simple Object Access Protocol (SOAP). In 1977, Easley returned to school to complete her mathematics degree at Cleveland State University, while working full time at NASA and paying the tuition out of her own pocket.

Throughout her career, she tutored students in her community and encouraged them to consider careers in the STEM fields. She also worked as an Equal Employment Opportunity (EEO) counselor where she could address race, gender, and age discrimination complaints from NASA employees. Easley retired in 1989.

Annie Easley passed away on June 25, 2011, at age 78. Easley was interviewed for the NASA Johnson Space Center Oral History Project (JSC OHP) on August 21, 2001. The program was created to capture history from the individuals who first provided the country and the world with an avenue to space and the moon. In her words “…for me, it was wonderful, it has been a wonderful time to be alive, to see all of the changes that took place in my work life, from where we were to where we went. And to still see changes. I’m just fascinated by all of the changes.”