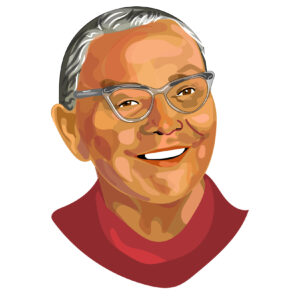 A member of the Navajo Tribe of Arizona, Annie Dodge Wauneka is “the legendary mother of the Navajo nation.” She advocated for public health, education, and improved welfare for her tribe, and worked to fight epidemics throughout the nation. Wauneka was awarded the Presidential Medal of Freedom in 1963 by Lyndon B. Johnson, the Indian Council Fire Achievement Award, the Navajo Medal of Honor, and inducted into the Women’s Hall of Fame.

On April 10, 1910, Annie Wauneka was born in Deer Spring, Arizona. She was the daughter of tribal leader and successful ranchers, Henry Chee Dodge and Mary Shirley Begaye. In 1918, Wauneka attended a government-run school in Fort Defiance, Arizona, where she learned to read and write English. During her first year, the 1918 Spanish influenza pandemic hit. She recovered from a mild case and helped the school nurse at the age of 8. Shortly after, because of the spread of trachoma, an infectious disease, Wauneka was transferred between schools. These events sparked her interest in public health.

After finishing eleventh grade, Annie returned home. In 1928, she married George Wauneka, a man she had met at school. Wauneka had nine children and her experience with difficult pregnancies and the death of one young child fueled her passion for postpartum and infant care.

During the 1930s, Wauneka involved herself with the Navajo tribe politics, working as an assistant and translator with her father. As the second woman to hold a tribal council position, Wauneka spent the next 30 years advocating better healthcare for the Navajo Nation; the establishment of reservation hospitals, more medical doctors to staff the hospitals, and increased trust in medicine. After the spread of tuberculosis in 1953, Wauneka chaired the Health and Welfare Committee. Upon seeing the detrimental effects of distrust, lack of education, and disbelief in modern medicine, Wauneka began taking classes to learn about tuberculosis and worked alongside physicians. She visited infected individuals’ homes, explaining the infection, and urging them to seek professional care. During this time, she earned a degree in Public Health from the University of Arizona. Wauneka created a dictionary that translated English medical terms into Navajo allowing people to better understand medical techniques, such as vaccination.

In 1954, reelected to the Tribe Council, Wauneka focused her efforts on disease prevention and childhood health practices. In addition to educating mothers and matriarchs, Wauneka urged the Navajo Tribe Council to purchase clothing and blankets that would be gifted to infants born in hospitals. Through the establishment of a Better Baby contest, she encouraged professional medical advice and better childcare habits lowering the infant mortality rate by over 25% in the 1960s. Along with pediatric preventive medicine, Wauneka focused efforts towards increasing education, building rural water systems, and curbing alcoholism in the Navajo Nation. As a Girl Scout leader and tribal health ambassador, she partook in political meetings and charity events and served on the U.S. Surgeon General’s Advisory Committee on Indian Health and U.S. Public Health Service.

After being diagnosed with Alzheimer’s disease, Annie Dodge Wauneka died in Toyei, Arizona on November 10, 1997, at age 87. As a recipient of the U.S. Presidential Medal of Freedom in 1963 and two honorary degrees in humanities and law, Wauneka is remembered as the “most honored Navajo in our history.” Even towards the end of her life, she said, “I’ll go and do more.”