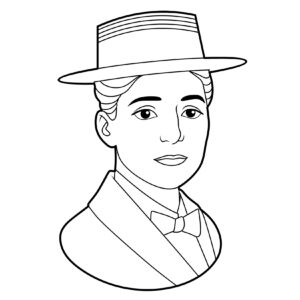 Annie Cohen Kopchovsky, known as Annie Londonderry, is recognized as the first woman to cycle around the world. On June 25, 1894, at the age of 24, she started from her home in Boston, Massachusetts and headed west. Once she reached Chicago she traveled back to New York and took a ship to France. She traveled through Europe and Asia and arrived in San Francisco, California on March 23, 1895, and eventually back to Boston on September 24, 1895.

Londonderry was born in Latvia in 1870. Her family moved to the United States in 1875, settling in Boston. Her parents, Levi and Beatrice Cohen both died in 1887 leaving Londonderry and her brother to take care of their three younger siblings. In 1888, Londonderry married Simon “Max” Kopchovsky and the couple had three children within four years. Londonderry worked selling advertising space for Boston newspapers.

On June 27, 1894, Londonderry started her cycling journey from the Massachusetts State House on Beacon Hill. The mother of three (ages five, three, and two) was 5 ft 3 in. (1.6 m), weighed about 100 lb (45 kg), and had no previous cycling experience. She starting with one change of clothing, a 42 lb bicycle, and a pistol. Londonderry claimed the trip was inspired by a bet with two rich Boston men who wagered that no woman could travel around the world by bicycle in 15 months. However, Londonderry’s great-grandnephew, Peter Zheutlin, has stated that, ”It’s virtually certain, for example, that she concocted the wager story to sensationalize her trip.” Londonderry is quoted saying, “I didn’t want to spend my life at home with a baby under my apron every year.”

Londonderry’s primary income came from selling advertising space on her bike and self. Londonderry Lithia Spring Water Company of New Hampshire was her first sponsor. She was paid $100 to carry their placard on her bike and to use the name “Annie Londonderry” throughout her trip.

From Boston she headed west and reached Chicago. In Chicago she switched to a lighter bicycle from the Sterling Cycle Works and she moved from a dress to bloomers. Along with the bike, Sterling Cycle Works offered to sponsor her trip. From there she turned around and went to New York. Once in New York, Londonderry took a boat to France. According to sources, Londonderry completed most of her long stretches by boat and train.

Londonderry returned to Boston on September 24, 1895, after traveling through Europe, Asia, and across the United Stated. Once home, she was offered a job writing for “New Woman” about her adventures. Her article began “I am a journalist and ‘a new woman,’ if that term means that I believe I can do anything that any man can do.”

Bicycles with two wheels of equal size and chain were first created in the 1880s and became known as “safety bicycles.” These bicycles were said to be significant in the women’s movement. In an 1896 interview in The New York World, Susan B. Anthony said, “Let me tell you what I think of bicycling. I think it has done more to emancipate women than anything else in the world. I stand and rejoice every time I see a woman ride by on a wheel. It gives a woman a feeling of freedom and self-reliance. It makes her feel as if she were independent. The moment she takes her seat she knows she can’t get into harm unless she gets off her bicycle, and away she goes, the picture of free, untrammeled womanhood.”

Londonderry died on November 11, 1947. Londonderry was known for her embellished stories throughout her travels. In 2007, her great-nephew, Peter Zheutlin, published Around the World on Two Wheels: Annie Londonderry’s Extraordinary Ride, for which he researched newspaper archives and family relics.