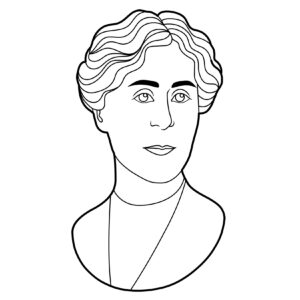 Annette Mary Budgett Meakin was a British travel author. Meakin and her mother, Sarah, were the first English women to travel to Japan on the Trans-Siberian railway. The trip is significant because it marked the first time any woman traveled this journey, spanning from Western Europe to the easternmost tip of Asia for a total distance of about 5,800 miles (9,300 km). The experience led to her book, A Ribbon of Iron, a chronicle of the harsh conditions women across Asia lived in and an observation on the anthropological relationships of motherhood, marriage, and other dynamics of Asian society.

Born on August 12, 1867, to Edward Ebenezer and Sarah Meakin, Annette Meakin received an education in music in England at the Royal College of Music and Germany at the Stern Conservatoire as well. Following her time at these colleges, Meakin studied classics at the University College London. It was here that Meakin discovered her passion for writing. Despite her career in writing, Meakin took on the role as a chemist’s assistant in World War I to help with the war effort.

Meakin’s idea to travel to Japan across the Trans-Siberian Railway was born in 1896, four years before the completion of the railroad. In A Ribbon of Iron, Meakin notes that she made it her goal to be the first English woman to travel the route from England to Japan via this railway.

Annette Meakin convinced her mother, Sarah, to join her on the journey. At the time, two women traveling such a long distance in a foreign land was mostly unheard of. Meakin notes in her book that they hid their journey from friends to spare them a “deal of needless anxiety.” Meakin also notes an Englishman aboard the railway who expressed doubt at the ability of two women to travel the lengthy route. The first leg of the trip was from London to Paris, where the pair spent six weeks brushing up on French and studying maps that their route led them through.

From Paris, the pair boarded the Trans-Siberian Railway to Moscow. Meakin delighted in socializing with citizens of various nations. She played cards with Russians, Germans, and French denizens. Meakin also read books from the vast selection of available classics, from North Asian literature to European novels. Meakin enjoyed learning about the different cultures as she passed through Russia.

The pleasant parts of Meakin’s journey were marred by accounts she heard of inhumane acts across Russia. Stories of Cossacks brutally attacking Chinese peasants, Russian soldiers burning down rebellious towns in Manchuria, and prisons in Tomsk gave Meakin a realistic outlook that pierced through the facades of humanity. Although she experienced the goodwill, Meakin also saw the savage cruelty that swept the Siberian landscape.

After the Meakin and her mother returned to London, she published A Ribbon of Iron in 1901. Meakin published a total of 11 works in her lifetime. Her writings include a series of letters, anthropological and political observations, and analyses of famous plays and playwrights. A Ribbon of Iron remains her most influential work.

Annette Mary Budgett Meakin died on July 26, 1959, at age 91. She donated her papers to the Bodleian Library in Oxford, England.