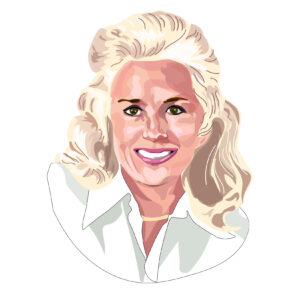 Over the course of her life, ecologist, award-winning author, and photographer Anne LaBastille became one of the most influential guides and environmental activists of the twentieth century in the Adirondack Mountain region.  LaBastille was honored by the Explorers Club, the Society of Woman Geographers, and the World Wildlife Fund for her work in wildlife ecology in the United States and Guatemala.

Mariette Anne LaBastille was born on November 20, 1935, in Montclair, New Jersey. After spending much of her childhood exploring the Adirondack region, she attended Cornell University, where she studied the Conservation of Natural Resources. As a graduate student at Colorado State University, LaBastille participated in field research in Guatemala to save endangered birds and their habitat from commercial development and increased tourism. She later returned to Cornell in 1969 for her doctorate, becoming the first woman to study wildlife ecology at the university and eventually the university’s first female professor of natural resources.

Between 1964 and 1965, LaBastille purchased property on Twitchell Lake in the Western Adirondacks where she built a log cabin. This became the inspiration for her Woodswoman book series. The memoirs, which detail her life in solitude in the Adirondacks, were released over the span of 40 years. The first book in the series, Woodswoman: Living Alone in the Adirondack Wilderness, launched her writing career and sold more than one hundred thousand copies. The final two books in the series, Woodswoman III and Woodswoman IV, were both published under her own publishing company, West of the Wind Publications. Along with her memoirs, LaBastille wrote over 150 magazine articles and 25 scientific papers, as well as sixteen books including The Wilderness World of Anne LaBastille and Women and Wilderness.

Over the course of the 1970s, LaBastille obtained her New York State Guide license which permitted her to lead backpacking and canoe trips through the Adirondacks. She also hosted wilderness workshops and lectures, joined environmental organizations, and participated in a project with the Environmental Protection Agency (EPA) to photograph areas suffering from environmental problems. Her photographs for the Documerica series featured a variety of subjects including urban sprawl in the Adirondack region and life in small towns. LaBastille continued to travel internationally, tackling several environmental issues including acid rain, water pollution, and climate change while informing the public of the necessity of conservation.

During her lifetime, she received a variety of awards and honorary degrees including a Gold Medal for Conservation from the World Wildlife and the Lifetime Achievement Award from the Adirondack Literary Awards. LaBastille was also an Honoree of the National Women’s History Month in 2009 as a woman taking the lead to save the planet.