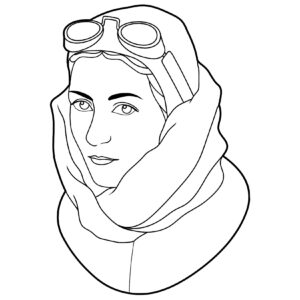 Amy Johnson was an English pilot and the first woman to fly solo from England to Australia. She flew in World War II and was the first British-trained female ground engineer. Johnson also set many long-distant flying records including a solo record from London to Cape Town.

Johnson was born on July 1, 1903, in Kingston upon Hull, East Riding Yorkshire. At age 20, she left to get a BA at Sheffield University. After she graduated, she worked as a secretary in London. Johnson started flying as a hobby at the London Aeroplane Club. She received her aviator’s certificate on January 28, 1929, and her pilot’s “A” license on July 6, 1929. That year she also became the first British woman to get a ground engineer’s “C” license.

Johnson’s first aircraft was a secondhand de Havilland DH.60 Gipsy Moth G-AAAH that she named Jason. In 1930, she set the goal of flying solo from England to Australia and hoped to beat Bert Hinkler’s 1928 record of 15 ½ days. On May 5, 1930, she took off from Croydon, England and flew 11,000 miles (18,000 km) in 19 ½ days. On May 24, she landed in Darwin, Australia becoming the first woman to fly solo from England to Australia. Johnson received the Harmon Trophy as well as a CBE (Commander of the Most Excellent Order of the British Empire). The British press named her “Queen of the Air.”

Johnson’s next plane, Jason II, was a de Havilland DH.80 Puss Moth G-AAZV. In July 1931, she and Jack Humphreys became the first people to fly from London to Moscow in one day, completing the 1,760 mi (2,800 km) trip in about 21 hours. They continued on to set the flight record time from Britain to Japan. In July 1932, Johnson set a solo record for the flight from England to Cape Town, South Africa in a Puss Moth G-ACAB, named Desert Cloud.

In 1933, she also flew in a de Havilland DH.84 Dragon nonstop from Pendine Sands, South Wales to the United States with her husband, Jim Mollison. They ended up crashing near Bridgeport Municipal Airport (now Sikorsky Memorial Airport) in Connecticut, but both survived with only minor injuries. In 1934, Johnson and Mollison, set a new record time flying to India in a de Havilland DH.88 Comet in the England Australia Air Race. In May 1936, Johnson set a new solo record traveling again from England to Cape Town, in a Percival Gull Six. That year, the Royal Aero Club awarded her the Gold Medal.

Amy Johnson died on January 5, 1941. During a routine flight, her plane crashed into the Thames Estuary. The exact details of the crash are unclear. Today, Sewerby Hall and Gardens has two rooms dedicated to Johnson in its museum. One room displays a collection of memorabilia and the other shows a short film about her record-breaking flight to Australia. In October 2015, easyJet launched the Amy Johnson Flying Initiative to help attract more female pilots.