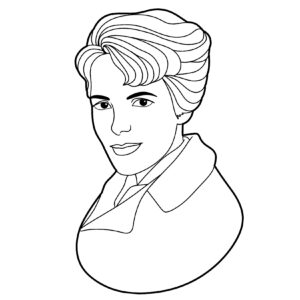 One of the most famous woman adventurers of all time, Amelia Earhart’s many feats include several world records, including being the first woman to fly solo across the Atlantic. Her tragic disappearance in 1937, which has never been resolved, cemented her legend.

Born in 1897 in Kansas, U.S.A., she is said to have been an avid adventurer since early childhood, leading neighborhood explorations with her younger sister. As a young adult, she kept a scrapbook of successful professional women, whom she aspired to one day emulate.

In 1917, after meeting wounded soldiers returning from WWI, she was inspired to become a nurse. It was working at a hospital in 1918 that she was infected during the Spanish flu epidemic and was convalescent for almost two years. On an outing after her recovery, she and her father visited an airfield, where veteran World War I pilot Frank Hawks gave Amelia Earhart a ride. She was so fascinated by the experience that she started taking flying lessons, which she paid for doing odd jobs. Her instructor was the pioneer aviator Anita “Neta” Snook.

Only six months later, in summer of 1921 Amelia Earhart bought her first plane, a yellow second hand biplane that she named “the Canary.” In October of 1922 she set her first world record by being the first female pilot to ever fly at an altitude of 14,000 feet (4,300 m).

Despite this promising start, the financial situation of the Earhart family deteriorated, her parents separated, and Amelia Earhart had to sell the Canary. She bought an automobile instead, and she and her mother embarked on a cross-country trip from California to Massachusetts. They settled there, where Earhart found work as a teacher and later as a social worker. She also became a member of the American Aeronautical Society.

In 1928, she got a call that changed her life. The previous year, Charles Lindbergh became the first man to fly solo across the Atlantic Ocean, and the pilot Amy Guest was looking to sponsor the first woman to fly across the Atlantic. Amelia Earhart was selected for the flight to accompany the pilot Wilmer Stultz and the copilot and mechanic Louis Gordon. The flight took place in June 1928. This gained Earhart significant fame and celebrity status. She became an editor of the magazine Cosmopolitan and advocated for women in the field of aviation. She promoted commercial air travel and she was vice-president of an air travel company.

In 1929, she became the first woman to fly across North America and back, and tried competitive air racing. 1932, she flew across the Atlantic again, this time solo, becoming the first woman ever to do so. She completed the trip in record time.

In 1937, Amelia Earhart set out to accomplish what would have been her most notable world record: the longest flight across the globe. On June 1st, Earhart and Fred Noonan, who was selected as her navigator, departed from Miami. The trip ran successfully through South America, Africa, and Asia. On July 2nd, they took off from Papua New Guinea to cross the Pacific. They were supposed to make a stop on Howland Island, but the plane never made it to its destination. Amelia Earhart was declared officially dead in 1939. Her disappearance has been the subject of speculation ever since, but the most accepted theory is that the plane crashed in the Pacific Ocean after running out of fuel.

This was the tragic end to a short but extremely full life. Earhart did not only defy expectations of womanhood in practice, she was also a public and vocal women’s rights advocate. She supported the Equal Rights Amendment, which would recognize equality of men and women under the constitution, she served as a women’s career counselor at Purdue University and publicly advocated for women in the field of aviation.